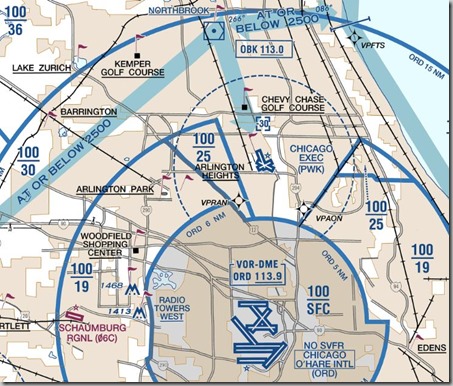 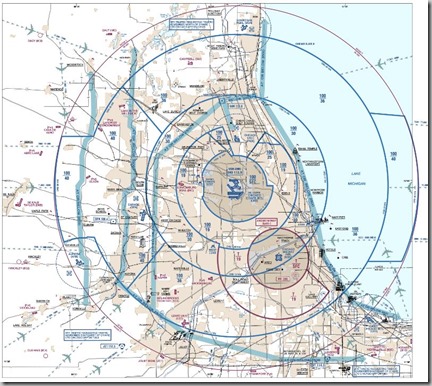 To those on the ground, airspace is invisibly boundless. All that changes in an airplane. To make flying safe for pilots, their passengers, and people on the ground , the sky is subdivided into unseen slices delineated by altitude and distances from specific points on the ground, like airports. In each of five airspace categories, pilots and aircraft must meet specific training, equipment, and procedural requirements, from weather and visibility minimums to getting clearance from air traffic control before crossing one of these invisible dividing lines.

Naturally, the more airplanes and airports there are in a given area, the more complex the airspace, like that which covers Chicagoland. O’Hare International (ORD) anchors the angular funnel that is Class B controlled airspace, which is roughly 10 nautical miles in diameter where it touches the ground. When measured east to west, the top of the funnel, at 10,000 feet, is 60 nautical miles in diameter. If O’Hare was the only airport covered by this funnel, guiding airliners to and from it would be a simple matter. But it is one of roughly 16 public and private aerodromes, one of which, Chicago Midway (MDW) is encompassed with its own bubble of Class C controlled airspace.

Looking at the Chicago Terminal Area Chart above, Chicago Executive Airport (PWK) is easy to find. It is in the notch cut into the 5-to-10-nautical mile ring that encircles O’Hare. That cutout raises the floor of Class B airspace, entry into which requires an air traffic control clearance, from 1,900 feet in the rest of the 5-10-mile ring to 3,000 feet, as do the corner slices adjacent to the PWK notch.  Those wide blue tinted lines cutting through the rings denote the recommended paths and altitudes for pilots flying under visual flight rules beneath the Class B airspace.

And it is a busy airspace funnel. The FAA’s Air Traffic Activity System tracks and reports the number of operations (takeoffs and landings) at airports with control towers and the number of airplanes fed to those airports by the air traffic control facility responsible for the airspace, which for Chicagoland is located in Elgin. In 2015, it handled 1,248,503 operations, with 782,905 of them being airliners, most of which were on their way to O’Hare or Midway. That same year Elgin routed 318,434 air taxi (aka charter flights) and 110,407 general aviation operations to their destinations.

Plugging Chicago Executive Airport into the Air Traffic Activity System showed that in 2015 its control tower handled 76,901 operations. Of that number, the FAA classified the majority of them “IFR Itinerant,” meaning the airplanes taking off or landing were going to or coming from some other airport. Of the 34,188 such operations in 2015, general aviation accounted for 21,719 and air taxi (charter) tallied 12,376. It’s a busy place that is a notched neighbor of an even busier place.

The point is that each operation represents an airplane that’s going someplace, either starting or concluding its flight. The floor of the Class B airspace over Chicago Exec starts at 3,000 feet and climbs to 10,000 feet. Nearly all business jets depart PWK on an instrument flight plan. Before takeoff, air traffic control  clears them through and out of Class B airspace on a specific departure route that keeps them safely separated from all the other airplanes flying in the funnel. ATC reverses the process for airplanes bound for Chicago Exec.

When the weather is good, most of the other general aviation traffic, from people flying their own planes on business or for pleasure and newcomers learning to fly, stay out of Class B airspace by flying beneath its floor. Over Chicago Exec, that’s 3,000 feet, but directly east or west it quickly descends to 1,900 feet with steps down in the adjacent transition areas. So when you look up at the sound of an airplane flying over, see no other airplanes in the immediate vicinity, and wonder why it is so low, remember that the pilot is avoiding the invisible layers of the Class B airspace, and that this single airplane is just one of more than a million making its way to or from Chicagoland every year.