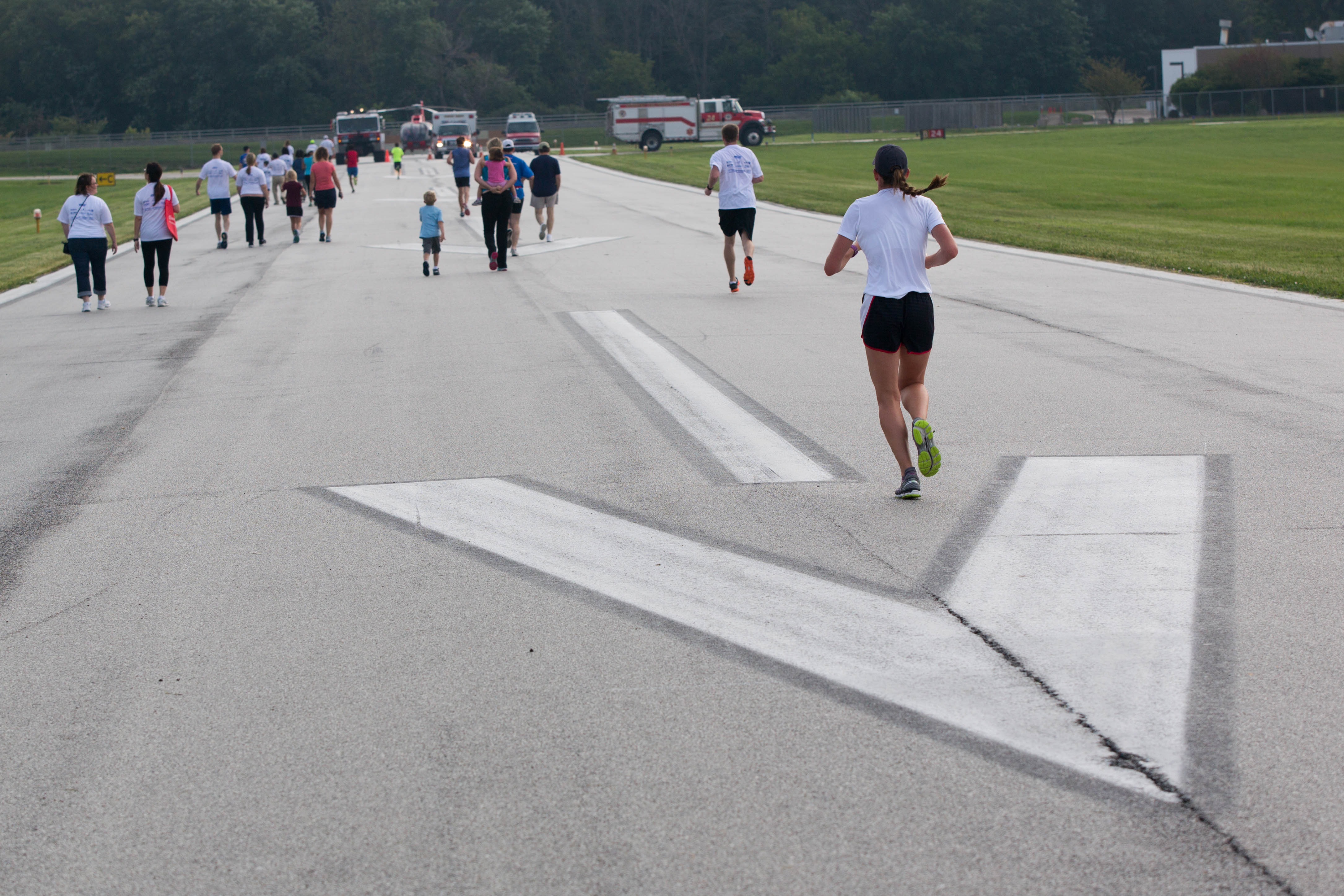 Chicago Executive Airport is one of thousands of airports that dot the American landscape. Each of them is different, but pilots have little trouble navigating around them because each of them use standardized pavement markings on the taxiways and runways that safely and efficiently guide them from the ramp to the sky. (Although they didn’t offer much help to the runners who raced about the airport several years ago, but they did get to see them at close range.)

Runway markings are white, and the elements employed depend on the type of approach pilots make to it. Runways with visual approaches, where the pilot eyeballs his arrival, has the fewest markings, the runway number, which is its magnetic heading to the nearest 10 degrees, and a centerline. These are on all runways. If the strip is 4,000 feet or longer or used by jets, it will have a visual aiming point, two broad white stripes on either side of the centerline approximately 1,000 feet from the threshold.

If it is intended for commercial use, markings (either a series of longitudinal or one lateral stripe) identify the pavement suitable for landing. A number of airports, like Chicago Exec, have displaced thresholds, usually to ensure an airplane’s safe approach to touchdown. Arrows on the pavement point to where the legal landing area begins.

All runways served by a nonprecision instrument approach, which in bad weather provides horizontal guidance to the runway, have these four markings. Chicago Exec has precision instrument approaches leading to both ends of Runway 16, which also provides vertical guidance to the pavement, which is why it has a touchdown zone. The rectangular bars are arranged in symmetrical pairs spaced 500 feet apart. As the number of bars decreases, so does the length of the remaining runway. Precision runways also have side stripes. 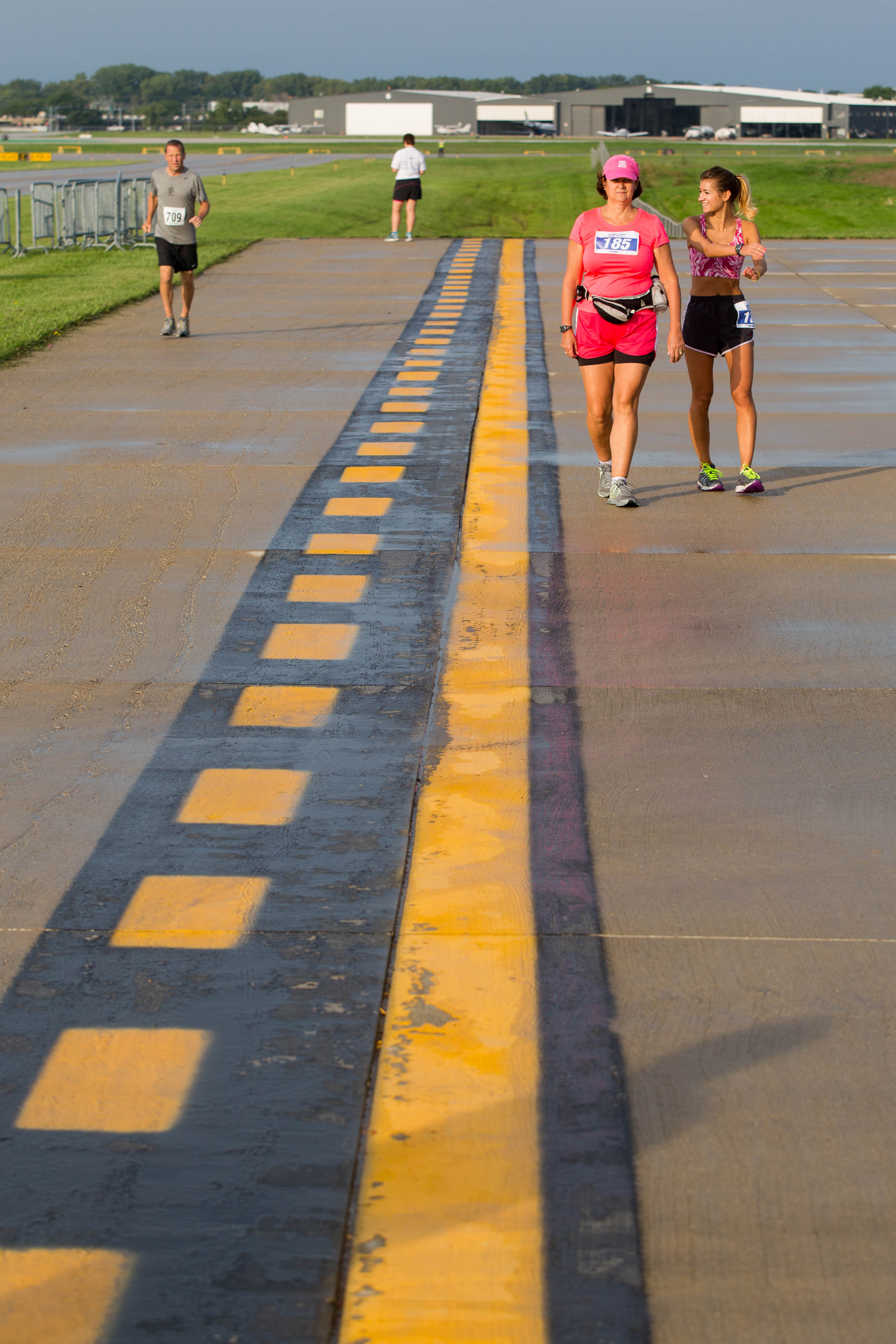 All taxiway markings are yellow, and a centerline and markings denoting holding positions are common to all of them. A continuous strip 6 to 12 inches wide, the centerline does not guarantee wingtip clearance with other aircraft or obstacles. A line indicating the edge of the taxiway is applied when it does not correspond to the end of pavement.

Chicago Exec has an enhanced centerline, yellow dashes that parallel the continuous centerline, which tells pilots they are approaching a runway holding position and should be slowing down and preparing to stop, or hold short of the runway or intersections. Hold-short markings have two solid stripes on one side and two dashed lines on the other. Airplanes must stop when approaching the solid lines, which are on the taxiway side of a runway intersection. They may continue without stopping when on the dashed-line side, which they face when exiting the runway after landing.

Solid white lines on either side of a dashed centerline denote the edges of vehicle roadways that cross pavement also intended for aircraft. Some airports also use “zipper” markings, alternating white blocks. In either case, aircraft have the right of way. A thick white block on the pavement denotes where vehicles must stop at intersecting roadways or before crossing taxiways or other operational areas.

Working in concert with an airport’s pavement markings are a variety of signs of different colors that tell pilots where they are on the airport, and which way they should turn to reach their desired destination whether it is the departure end of a runway or a parking area. We’ll introduce them in our next Airport 101.