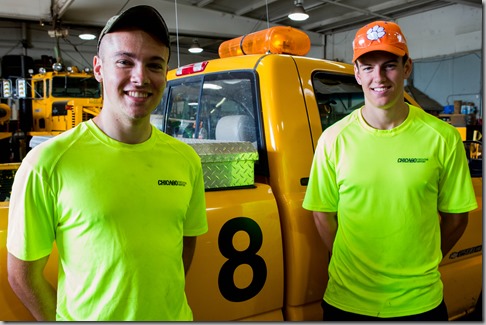 Mowing grass and whipping weeds may seem a mundane, menial summer job, but that’s not true at Chicago Executive Airport. As the four airport interns are learning this summer, these tasks are an excellent first-hand lesson in life in an airport operation area. Often referred to as the AOA, it is defined as any area of an airport used or intended to be used for takeoff, landing, or surface maneuvering of aircraft. This includes paved and unpaved areas, including runways, taxiways, taxi lanes, ramps, and aprons.

In other words, the AOA is everything inside the airport fence, and nothing moves within it without the FAA control tower knowing about it. Anything that moves on the airport, airplanes, helicopters, trucks, lawn mowers, or interns with a weed whip, must be cleared for the movement by the tower so there is not an unfortunate, unintended meeting of any two of them, explained James Kelly (below), a Tinley Park-native who will start his senior year at Lewis University, where he’ll earn a degree in aviation administration, with a minor in flight dispatch.

The students started their internships with a class that certified them to drive on the AOA. Working with an airport diagram they learned where they could and could not drive, how to identify their location on the airport and read the signs and pavement markings that identified them, and how to communicate with the tower’s ground controller.

“We got a tour of the tower,” said Conner Wagner, (on right, with Will Thompson and “their” truck, Airport 8) who hails from Jackson, Michigan, and graduates in 2017 with a degree in aviation management operations with a minor in business from Western Michigan University. “It was interesting to see how the controllers coordinate all the activity on the ground and in the air, all the vehicles and planes in the airport operating area.” A classmate, Brendan Stauton, is also interning at PWK this summer. Working toward a professional pilot degree, he’d returned to campus to take the FAA checkride for his instrument rating, which he passed, said Wagner. 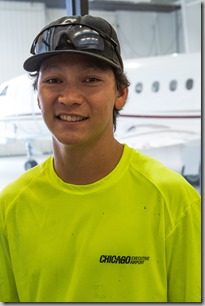 In accordance with the airport’s wildlife management plan, the interns mowing efforts are coordinated so that the grass stays between 5 and 8 inches in height. Any shorter and insects would be readily visible, attracting their predators, and any longer would provide too much cover for mammalian prey from their predators. And while they are mowing or whipping weeds, the interns are looking for animals, inspecting the fence line for places where animals have dug under the fence, and keeping an eye out for burned out airport lights.

After reporting a burned out light, the interns learned how to replace them under the watchful eye of a member of the airport maintenance crew. Airport Operations Coordinator Andrew Wolanik and Assistant Airport Operations Coordinator Bryce Walter are the interns’ primary supervisors. Mowing and whipping occupy roughly half their time. They have undertaken any number of different airport projects. In the week before Independence Day, they were building 180 sets of wheel chocks from scratch. They will secure the airplanes moved from their usual homes in Areas 2 and 3, so the airport would have someplace to park cars for Chicago Exec’s July 4 weekend activities.

Three of Chicago Execs four summer interns learned about the opportunity through the aviation degree programs in which they are enrolled, and their summer efforts are bookended by the end of the last school year and the start of the next. Will Thompson of Winnetka, a political science major who just finished his freshman year at Villanova University in Philadelphia, Pennsylvania, learned about the program from PWK Civil Air Patrol unit he joined in 2014. His internship is shorter than the others. With his sights set on being an aviators, “I’m in U.S. Marine ROTC, and I have some training to do before school starts.”