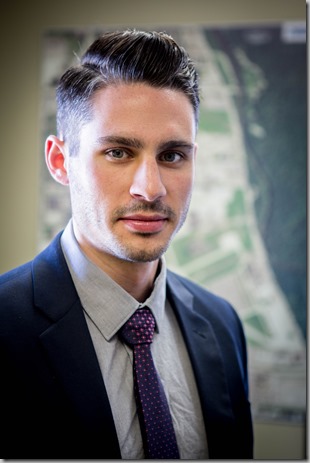 A full-time position as the assistant airport operations coordinator was the last thing Bryce Walter expected when he secured an internship at Chicago Executive Airport. Receiving the offer in mid-December 2015 for the internship that started with the New Year, the Grand Rapids, Michigan, native’s immediate concern was finding a place to live. “All my friends told me I needed to get a place in the city, because there are a lot of fun things to do there,” he said, and they were right. Now building a career and future at Chicago Exec, he’s looking for a place closer to the airport.

Completing his degree in aviation management operations at Western Michigan University in August, Walter briefly considered a flight degree, and earned his private pilot certificate in the process, but quite a bit of job shadowing at the Grand Rapids airport revealed greater opportunity and a more diverse series of challenges. “But the initial hurdle is that nobody wants to hire someone in operations who doesn’t have experience, so I knew I needed an internship to get some. I started looking and found that not a lot of airports want to help people get started with internships.”

In the end, he found three, and his final choices were Aspen, Colorado, and Chicago Exec. “I’ve been to the Chicago area quite a bit, and it was more appealing than Aspen,” said Walter. And it’s closer to home, where he and a partner run a wedding DJ business. “During the 2016 season I’m only doing one wedding a month,” he explained, adding that his business partner is “really slammed.”

Focused on every opportunity to build experience, Walter moved over the Christmas holiday. With the first of the year he started light, he said, shadowing Andrew Wolanik, Chicago Exec’s airport operations coordinator, and undertaking “little projects” for Airport Director Jamie Abbot. It wasn’t long before Walter was participating in snow removal operations in the ops truck, inspecting the airport operation area and following the broom trucks to measure braking action on the runways. “It’s pretty exciting. You drive down the runway, and when you reach the specified speed you slam on the brakes and the pickup’s computer sensors read and display the resulting braking action, which we report to the tower.”

As Walter gained experience, built trust with the airport staff, and demonstrated his proactive effort, he received more involved projects and, in April 2016, the offer of a full-time position as the assistant airport operations coordinator. His responsibilities now include a lot of bids and proposals for work to make the airport safer and more efficient. One example is the inspection program he developed for the airport vehicles that improves their operational readiness and extends their service life. Another is developing a design for a landscaped entrance sign for the airport at the intersection of Milwaukee and Palatine.

Walter is trading weekends with Wolanik on the runway resurfacing project. “We need to shut the runway down and make sure everything is good to go before the construction crews begin work, and make sure they are in communication with the tower so they are not crossing active runways. Then we make sure everything is back to normal before we return the runway to service.” And Walter is supervising this summer’s four interns who are starting to build their airport operation experience at Chicago Exec. Explaining that the airport has employed four interns for a number of summers, “I wish I would have known about this when I was in school.”