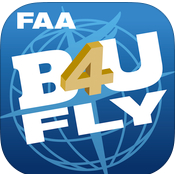 The FAA on Tuesday released a new smartphone app called – B4U Fly – to tell users about current or upcoming requirements and restrictions in areas of the National Airspace System (NAS) where they may want to operate their unmanned aircraft system (UAS). The app is now available for Apple devices and can be downloaded from the App Store.

The B4UFLY app includes a number of enhancements the FAA developed as a result of user feedback during the beta testing announced in May 2015 . Within two taps, users know if it is safe to fly at their current location. The app provides a status indicator that tells users: “Proceed with Caution,” “Warning – Action Required,” or “Flight Prohibited.” The app also features a planner mode that allows users to select a different time and location for an upcoming flight and determine if there are any restrictions at that place and time.