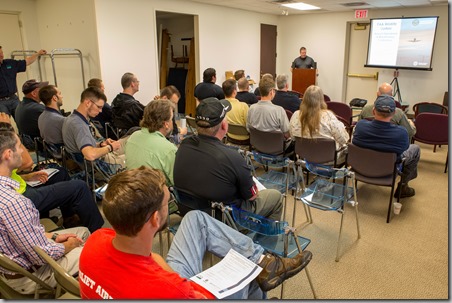 Mitigating wildlife hazards is especially important to Illinois airports because they are smack-dab in the middle of the Mississippi Flyway, North America’s main migratory thoroughfare between north and south.

The FAA has required wildlife assessments and management plans at Part 139 commercial airports like O’Hare and Midway since 1990, and strongly recommended that general aviation airport’s (like Chicago Exec, where the USDA recently completed a wildlife assessment) voluntarily do the same because wildlife and airplanes have had unfortunate meetings from the dawn of powered flight. US Airways Flight 1549, brought down by geese in 2009, is the best-known incident. Calbraith Perry Rodgers didn’t have the same happy outcome when he met a flock of birds in midair shortly after he became the first pilot to fly across America in the Vin Fizz, a Wright Flyer Model B. Flying another Model B, he died on April 12, 1912 in Long Beach, California.

Starting at 9 a.m., representatives from USDA Wildlife Services, the FAA, and the Illinois Aeronautics Division discussed their roles in wildlife hazard assessment, management, and mitigation. For any airport, having the USDA complete a wildlife assessment is the key that unlocks federal and state funding that enables them to develop and act on their unique plans to reduce the wildlife hazard.

Reporting wildlife strikes is a key element, and the FAA Wildlife Strike Database collates all of them. Since it was established, the number of strikes has increased every year, not because their numbers are increasing, but because of better reporting. At the same time, those reports show that airport wildlife management plans are working because the number of strikes resulting in damage is decreasing. 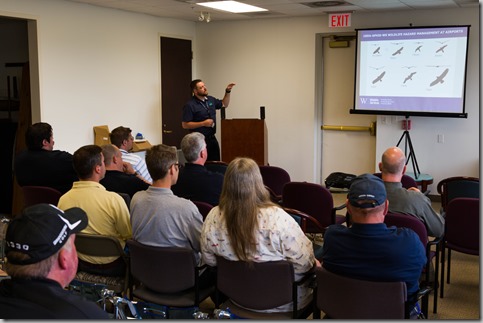 Most strikes happen on landing, and 97 percent of them occur below 3,500 feet. Wildlife strikes, posted to the FAA website, come from pilot reports, maintenance technicians who repair the resulting damage (or remove remains on the airframe), ground personnel who see a strike or find wildlife remains within 250 feet of the runway centerline, and anyone who witnesses wildlife cause a “negative effect” on an airplane’s flight path (like a go-around or aborted landing).

A video illustrated the reporting process and emphasized the importance of collecting the remains to positively identify the species involved because the mitigation efforts are different for each of them. “You just can’t shoot them,” explained a USDA wildlife biologist because most birds are protected by the Migratory Bird Treaty of 1918 and the Bald & Golden Eagle Act of 1940. Mammals are covered by the Animal Damage Control Act of 1931. And then there are the state regulations for game birds and mammals.

To get the federal and state permits needed to deal with a specific wildlife hazard, airports must show the results of their wildlife management plan that employs a standardized depredation hierarchy. Killing the animal is the last resort. It starts with habitat management, making the airport environment unattractive to prey and predators. This works in concert with exclusion, the fences and culvert grates that keep animals out. Active management starts with harassment, using dogs, falcons, effigies of predators, pyrotechnics, and propane sound cannons that the species are afraid of. Capturing the critter causing the hazard and relocating it is the next to last step. 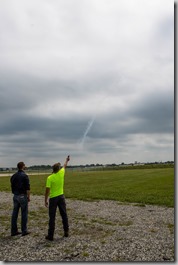 After lunch the wildlife biologists used photos and silhouettes of the birds most often found in the areas and how to identify them. The details are important. Egrets, for example, are white, but snowy egrets have black beaks and legs and the great egret has black legs and a yellow beak. They recommended that each airport truck carry binoculars and a wildlife log to record the date, time, season, and weather conditions of each sighting. As an example of why the weather matters, one airport wondered why birds gathered on the runway threshold after it rained. Closer examination showed that they were feasting on the earthworms that sought drier refuge there.

Before taking the test that earned them a certificate for their annual airport wildlife hazard management training, the session discussed the use of pyrotechnic harassment tools. And after the test they went into the grassy area across from Hangar 19 to get some first-hand experience with bangers and screamers. In closing, the biologists urged the participants to share their wildlife hazards and management activities with each other, because what works for one airport can benefit others in the area.