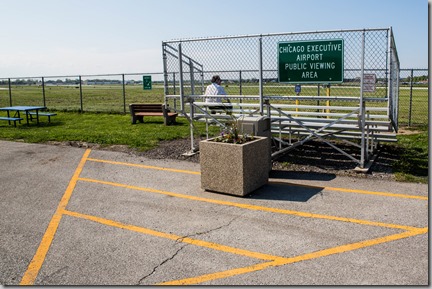 Designated spots at airports where people curious about or interested in aviation could watch airplanes take off and land used to be a lot more common than they are today. Most of them were at commercial airports, like Chicago Midway and Chicago O’Hare, where people could pass some time before their flights boarded. They were popular with families with energetic kids because it better focused their attention. Dedicated viewing areas at general aviation airports were—and are—rare. People, families, just drove to the airport, usually to a fixed-base operation or the airport office, and found a spot on the grass.

And then 9/11 happened. And wandering around a commercial airport like Chicago Midway or Chicago O’Hare became nearly impossible. And 10-foot-tall chain link fences surrounded a good many general aviation airports. But not at Chicago Executive Airport. It is one of the rare general aviation airports with a dedicated viewing area. If you haven’t seen it, it is located on Palatine Frontage Road. And to a degree, it’s famous. It is first on the list of airports nationwide when you ask Wikipedia about “public viewing area.”

Wikipedia defines a public viewing area as “a space set aside for members of the public to safely view sites of interest, such as airports, railroads, construction sites or other facilities…. In locations that have inherent dangers and would not normally be accessible to the public, viewing areas provide a way to satiate the public curiosity without exposing inordinate risk.” This describes Chicago Exec’s viewing area, but not completely.

Situated outside the airport fence, with a safe and unobstructed view of the approach ends of Runway 34 and Runway 30, PWK’s viewing area includes a sizeable parking area, seating in either the bleachers, benches, or at a picnic table. Next to the bleachers, a protected bulletin board displays notices and posters of upcoming airport events and activities. 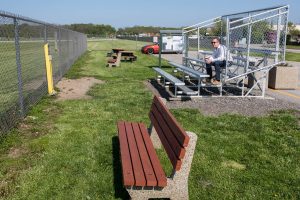 Passersby may usually observe at least one or two cars parked in the lot and many spectators return at different times of day or days of the week because there is always an opportunity for surprise. As an airport serving all of general aviation, no one can predict what type of airplane will next take the runway. Business aircraft are Runway 16/34’s usual patrons, but others run the gamut from current, classic, and antique single-engine prop planes, with an occasional military veteran now serving its civilian pilot. But these surprises do not appear without notice. If spectators listen in to the tower conversation, they’ll know what will soon fly into view.