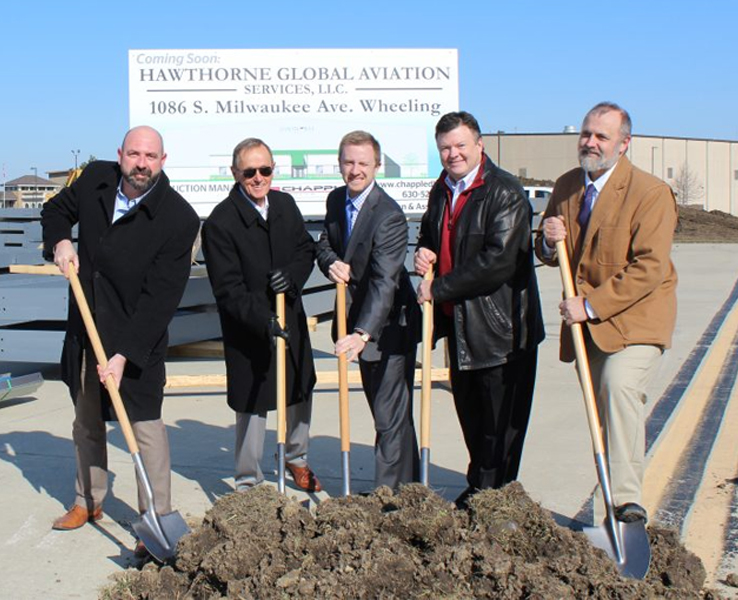 It’s always exciting to see earth-moving equipment and crews in hard hats scurrying around piles of fresh steel because it means new business opportunities for Chicago Executive Airport. Even more exciting though, is knowing all those raw materials were delivered to expand a company that’s already a part of the CEA family.

Of course it’s no secret that Hawthorne Global Aviation Services has been bursting at the seams in their original four-year old facilities on the southeast corner of the airport. Today’s ground breaking on the Charlie pad along the airport’s east side opened the door for current based tenants to have a little more room to move around when the structure is completed, currently expected before the end of 2018. Hawthorne also expects to be enough space between all the company facilities at CEA, to add to their growing list of customer 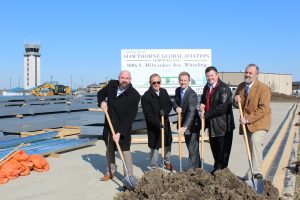 The Village President of Wheeling Pat Horcher and City of Prospect Heights Mayor Nick Helmer were on hand, as well as a number of Wheeling Trustees and Aldermen from Prospect Heights. David Annin, general manager of Hawthorne Global at CEA, Will Harton, Hawthorne corporate’s senior vice president for development and the airport’s executive director Jamie Abbott in addition to the mayor and village president were offered fresh ceremonial shovels at 9:17 a.m. Members of the airport board of directors attended, as well as representatives of the Wheeling Prospect Hts. Chamber of Commerce to support this new business effort.