From its founding in 2011 until the City of Chicago approved its downtown heliport in 2014, Chicago Executive Airport was home for Chicago Helicopter Experience, CHE. Its founding airport is just one of the destinations served by the company’s recently announced service, Premier Charters. Operating under an FAA Part 135 charter certificate, PWK leads the list of CHE’s most popular destinations, just 11 minutes from its downtown terminal.

Flying the five-passenger EC130 and twin-turbine EC-135 helicopters, CHE’s instrument-rated commercial pilots stand ready to get passengers where they need to go 24/7 at 160 mph. In addition to Chicago Exec, CHE’s popular destinations include airports throughout Chicagoland, from O’Hare and Midway to Aurora, DuPage, Schaumburg, South Bend, Gary/Chicago, Michigan City, and the Grand Geneva Resort. At Chicago Exec and the other airports it serves, CHE can land at the FBO of the customer’s choice.

CHE also serves a number of off-airport destinations. They include the Medinah, Autobahn, and Cog Hill country clubs, the Harborside International Golf Center, Chicagoland Speedway, the Northbrook Gun Club, and the Horseshoe Casino. But the company makes it clear that the destinations it serves are not limited to this list. As its website makes clear, “We will fly you anywhere in the Midwest quickly and comfortably.”

Making the most of time is what aviation does best. Fixed-wing aircraft are better suited for longer distances and helicopters have no equals when it comes to shorter distances, especially in cities where almost every square foot of space is already spoken for. Together, they form a partnership that serves people’s aviation needs. When it comes to travel, the shortest distance is not a straight line; it is the ultimate destination’s nearest airport and heliport. 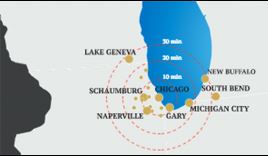 Chicago Executive is mere hours from any airport on either coast, and CHE’s heliport, located 2 miles from McCormick Place, 3 miles from the financial district, and less than 4 miles from the Magnificent Mile, is just 11 minutes from PWK. In 2016, at its downtown heliport, CHE will open its 20,000-square-foot LEED Gold certified terminal with its green rooftop and flight observation deck. In addition to customer service amenities and meeting facilities, it will feature a customer experience center with interactive and educational exhibits. It covers almost all the transportation bases. It is just off I-55, with ample free parking. A water taxi dock is part of its 2016 additions, as is bicycle parking.

Premier charter service is but one aspect of CHE’s services. The company was founded on aviation’s primary reward, viewing the world from an elevated perspective—day or night. But the addition is significant to aviation throughout Chicagoland because it inaugurates helicopter service to and from the city.