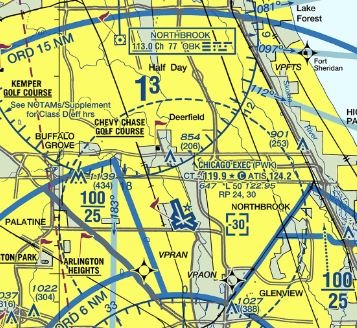 Class B airspace is a three-dimensional sculpture defined by invisible lines of altitudes and radial distances from the airport that anchors this funnel of protected airspace to the ground. In our case, that’s Chicago O’Hare International. Before the advent of moving map technology that, if enabled, makes these boundaries visible, pilots had to keep close track of their position relative to them. Apparently, technology has not solved the Class B incursion and excursion problem. If it had, would the FAA have issued a Safety Alert for Operators (SAFO 17001) dedicated to this issue?

Chicago Exec is tucked into a Class B notch in ORD’s 10-mile ring. It’s like an attic bedroom, with narrow walls that angle toward a narrow ceiling just 3,000 feet above the ground. Considering the number of aircraft the share this small alcove, and the speed at which they fly, it’s not a lot a room, especially when Mother Nature is in a meteorological mood. Making aviator awareness of aircraft position even more important are the winged behemoths above the line that are descending toward O’Hare.

The SAFO addresses both Class B incursions and excursions. Not singling out any specific Class B airspace, it says that some instrument approaches that take an airplane operating in Class B across the line, and then back in. Other excursions occur when pilots sink, for a moment, below a glide path that scrapes the floor of that Class B layer. If there’s another airplane outside of the Class B that’s crowding the boundary altitude, or if either airplane hasn’t accurately set its altimeter, bad things can happen. If they are lucky, they will escape with Near Mid Air Collision (NMAC) and the resulting increase in heart rate and blood pressure.

Now pilots know that they need clearance from Air Traffic Control (ATC) to enter Class B airspace, and it’s the controllers job to keep airplanes in Class B airspace from inadvertent meetings. And they do a world-class job of it. But they may not be working airplanes on the other side of the line. When these dedicated pros get busy, which means a heavy load of traffic, the SAFO explained, ATC may give an airplane instructions that will take it across the line, which is why pilots must always know where they are relative to that boundary. Why? Because “they may not be advised of such an event during times of high controller workload.”

And if ATC is busy, the chances of aircraft outside Class B getting flight following are nonexistent to not good. In other words, it behooves pilots on both sides of the line to not only know where they are relative to it, but to also keep their eyes open and searching and not depend on ATC to find and call out the traffic for them.

The SAFO recommends that pilots review and brief the Class B boundaries when their flight will be in or near it. And they should compare those boundaries to the instrument approaches they might fly and where they are relative to the Class B airspace. Whether the approach begins just below or just above the floor of a Class B layer, think of it as scud running through a maze, a situation in which there is little or no room for error, especially when following ATC vectors. Pilots should always be aware of their position relative to the maze’s vertical and horizontal invisible lines and redouble their see & avoid scan when they get close to either side of the line.