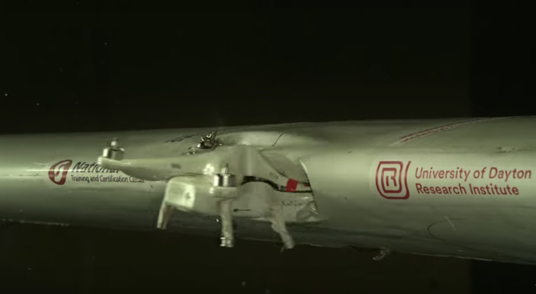 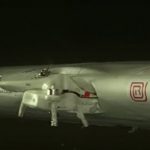 Drone operators who claim their small machines represent no threat to manned aircraft are just plain wrong according to research recently released by the University of Dayton.

In a test designed to mimic a midair collision at 238 miles per hour, researchers in UDRI’s Impact Physics group launched a 2.1-pound DJI Phantom 2 quadcopter at the wing of a Mooney M20 aircraft.

The drone did not shatter on impact, but rather tore open the leading edge of the wing as it bore into the structure, damaging its main spar. “While the quadcopter broke apart, its energy and mass hung together to create significant damage to the wing,” said Kevin Poormon, group leader for impact physics at UDRI.

“We wanted to help the aviation community and the drone industry understand the dangers that even recreational drones can pose to manned aircraft before a significant event occurs. But there is little to no data about the type of damage UAVs can do, and the information that is available has come only from modeling and simulations,” said Poormon, whose group has fired individual drone batteries, cameras and motors at metal panels. “We knew the only way to really study and understand the problem was to create an actual collision, and we’re fully equipped to do that.”

As the number of hobby drones in the air dramatically increases, so does the risk of a catastrophic event, Poormon said. “We’ve performed bird-strike testing for 40 years, and we’ve seen the kind of damage birds can do. Drones are similar in weight to some birds, and so we’ve watched with growing concern as reports of near collisions have increased, and even more so after the collision last year between an Army Blackhawk helicopter and a hobby drone that the operator flew beyond his line of site.

Poormon said additional tests using similar and larger drones on other aerospace structures, such as windscreens and engines, would provide critical information about how catastrophic a collision would be. He and his team are hoping even this first test result will help bring awareness to the manned and unmanned aviation communities about the importance of regulations related to safe drone operating.