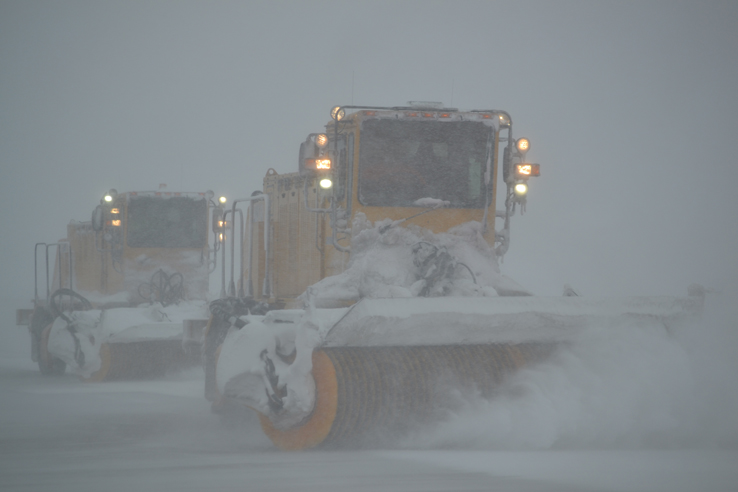 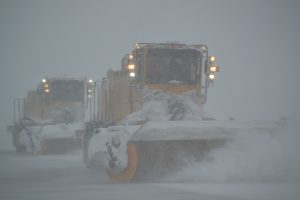 Anyone who’s lived through a few Chicagoland winters knows Mother Nature can sometimes fool us into believing that some winters won’t be quite as bad as in years past. And then there are times, like this year, when she throws us a few frigid blasts before late January’s traditional thaw. Even so, by early February we thought spring was only six or seven weeks away.

Few of us were quite prepared for the storms that dumped tons of snow on the region in mid-February though. Depending where you live, snow totals ranged from 8 inches to more than a foot. That’s no small amount of the white stuff to clear from sidewalks, driveways and streets.

But if you think you have it bad, try clearing 10 inches of snow from the hundreds of thousands of sq. ft. of concrete at an airport, where surfaces are often scrubbed more than once in a wintry day. Airport operations demand surfaces as close to dry as possible so aircraft landing and departing can stop in the available distance when necessary.

As a bit of a thinking exercise one day, we wondered, just how many cu. ft. of snow our airport crews moved during that last big storm, assuming we received the full brunt of that 10-inch snow fall.

Time to pull out the airport diagram (left) and a fully charged calculator.

We assumed the best way to figure the problem would be by multiplying all the airport’s surfaces in need of plowing – length x width – and then by the 10-inches of snow we used as our guideline. We didn’t include the ramps at our major tenants though since Signature Flight Support, Priester Aviation, Atlantic Aviation and Hawthorne Global Services take care of clearing their own ramps.

Runway 16/34, our longest landing surface is 5001 ft. x 150 ft., while runway 12/30 is 4415 ft. x 75 ft. We didn‘t add in our shorter runway 6/24, because that surface is often not plowed to save time. Next there are parallel taxiways “Lima” and “Kilo” that shadow runway 16/34. They’re 50 feet wide, as are the two taxiways that parallel Runway 12/30. Additional taxiways and crossovers, as well as ramps near the airport’s individual tee-hangars and portions of the tie-downs add approximately 1,000,000 sq. ft. of additional space in need of clearing.

When the snow begins, airport crews swing into action to operate removal equipment for as long as the snow continues. That might be a few hours, or a few days 24-hours a day under blizzard conditions. To make it all work, crews operate in shifts for food and rest breaks.

The airport owns and operates quite a bit of equipment to handle plowing duties, including, four Oshkosh Twin-Engine Broom trucks and two Oshkosh 20’ Plows trucks. Other snow removal equipment includes a twin-engine Idaho-Norland Snow Blower, Bob-Cat Skid with a blower, a 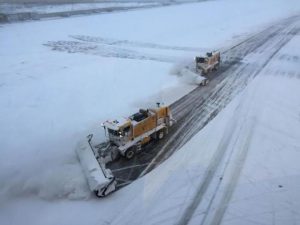 Time for the Answer

So, if you’re wondering how much snow airport crews cleared during the recent 10-inch accumulation, we’re going to give you one last opportunity to check your own math against ours.

Which answer below is the most accurate? Did airport crews clear,

The answer is B, approximately 1,964,605 cu. ft. of snow was cleared during that most recent storm. A more precise total is nearly impossible to calculate because crews began plowing as soon as the snow began and never really quit for two days. At times, they may have run over the same surface more than once, perhaps even four or five times during the course of the storm.

And of course, as the snow is removed, crews can’t simply shove the white stuff along the edge like you might with your driveway, because piles of snow near the runway’s edge create a safety hazard should an aircraft ever slide off the surface. Striking even a 6-inch snow bank could tear off the aircraft’s landing gear.

To put our snow problem in perspective, consider that the average commercial dump truck carries just shy of about 400 cu. ft. of material. Grabbing the calculator again means just one 10-inch snowfall would shove around enough of the fluffy white stuff to fill approximately 4,914 truckloads.

To the credit of the hard-working airport snow crews and the thanks of our tenants, Chicago Executive has almost never been shut down because of the inability to clear the runways. And when the next storm begins, whether that’s a few days or a few weeks later, airport crews begin the job of clearing the runways all over again.