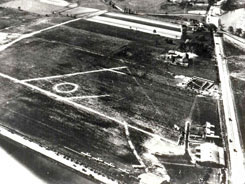 Founded in 1925 as Gauthier’s Flying Field, Chicago Executive Airport has grown over the years from a 40-acre grassy open area with dirt runways to a general aviation airport servicing the metropolitan Chicago area as one of the nation’s busiest reliever airports.

Gauthier’s Flying Field was renamed Palwaukee Airport in 1928 and expanded to 91 acres in the 1930s. 1933 brought the addition of a Blimp Hangar to the field. The airport also experienced significant growth during the 1940s when it was developed to cover 109 acres and consist of a gravel runway and 70 individual T-hangars.

In 1953, Priester Aviation Service acquired the Airport. Priester continued to develop the Airport for the next thirty-three years. Lighting was installed on the paved runway and a DC-3 hangar was constructed in 1954. By May of 1959 the Airport consisted of four runways. A VOR approach was established for the airport in 1961. New corporate hangars and a 5,000-foot runway (16/34) were constructed in 1965. In 1967 the Federal Aviation Administration (FAA) commissioned an air traffic control tower at the airport.

A 1,600-foot partial taxiway parallel to Runway 16/34 was completed in 1974. In the same year, the FAA began an ILS installation. The largest corporate hangar constructed to date was built in 2000. Improvements made by Priester Aviation at the airport continued throughout the late 1970s into the early 1980s, until the airport was acquired by its neighboring communities. 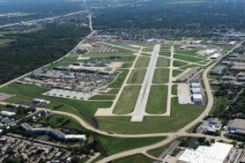 On December 26, 1986, the Airport changed from private to public ownership, as the City of Prospect Heights and the Village of Wheeling purchased what was then Palwaukee from Priester Aviation. Priester continued to operate the only fixed base operation following the purchase. Funding for the purchase was contributed by the FAA, the Illinois Department of Transportation and the municipalities. Funding from Prospect Heights and Wheeling was provided through airport revenues and had no effect on the municipal taxes for the two communities.

The airport has undergone significant construction, upgrading, and development projects. The intersection of two major arterial roadways and a drainage ditch were relocated beyond the runway safety area. A new air traffic control tower was commissioned in 1997. Beginning in 1997, Priester Aviation constructed three new corporate hangars in the east quadrant of the Airport that are capable of providing access for the new transcontinental business aircraft entering service. North American Jet, Inc. began construction of a new second fixed base operator facility in 1998.

The airport operates 24 hours a day year round. The air traffic control tower is staffed by the FAA and operates daily between 6 a.m. weekdays (7 a.m. weekends) and 10 p.m. The primary users of Chicago Executive Airport include private airplane owners, flight schools, businesses who maintain their company aircraft at the airport and major national corporations.

The airport has been involved in modernization projects to bring it up to federal standards, which include improving runways and building taxiways and aprons.