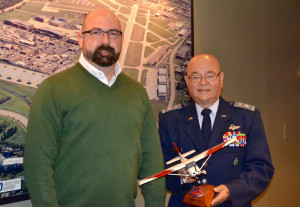 Civil Air Patrol (CAP) Lt. Colonel Lou Wipotnik, a long-time PWK flight instructor and former commander of the Chicago Executive airport squadron last week donated a hand-carved model of a Cessna 172 to the growing office collection of airport Executive Director Jamie Abbott. The donation occurred as Wipotnik announced his retirement from the CAP after 26 years of service, effective November 30, 2015. The 172 is an exact replica of N903CP, a CAP aircraft once based at PWK.

Wipotnik said, “I wanted to offer the Executive Director a small token of appreciation for the years of wonderful treatment he’s offered CAP, as well as the cooperation we’ve received from the Village of Wheeling and the City of Prospect Heights.”

Lou Wipotnik began flying in 1957 at Sallie’s Flying School at PWK and joined CAP that same year rising to become first the squadron and then CAP group commander until he enlisted in the U.S. Army in 1964. He returned to PWK in 1989 and served at the PWK squadron until his retirement.

Wipotnik was also in 1996 named the FAA’s Flight Instructor of the Year and was recently inducted into the Illinois Aviation Hall of Fame for 2016. Despite his retirement from CAP, Lou says he’ll continue to teach people to fly at the Leading Edge Flying Club and Fly There LLC, both based at hangar 5, as well as with individual aircraft owners.