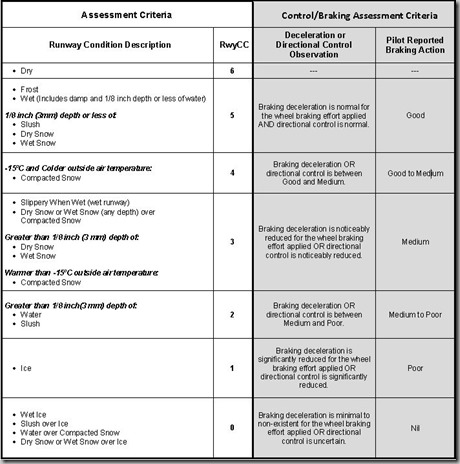 When the weather is not sunny, dry, and clear, pilots preparing to takeoff or land need to know what condition the runway is in. To improve these reports, the FAA and aviation community have developed new standards to improve safety during inclement weather. Airports will begin using the new Takeoff and Landing Performance Assessment (TALPA) standards on October 1, 2016.

Airport operators will assess the runway surfaces, report the contaminants, and use the RCAM to determine the Runway Condition Code. The same code can cover the entire runway when there is no variation in the contaminant. These codes will replace Mu numbers, which the NOTAM system will no longer use.

This does not mean pilots should stop reporting braking action. They will still be used and shared. However, the terminology used in these reports will change on October 1. “Medium” will replace the “Fair” braking action assessment. And airports will no longer be able to report a “NIL” braking action condition. Under the new system, NIL conditions require airports to close that surface until they are satisfied that the NIL braking conditions no longer exist.

Chicago Exec urges aircraft operators to review the appropriate performance sections of the aircraft flight manuals for their airplanes and develop procedures that will enable them to take full advantage of the new runway condition reports. For more information, see Safety Alert for Operators (SAFO) 16009.