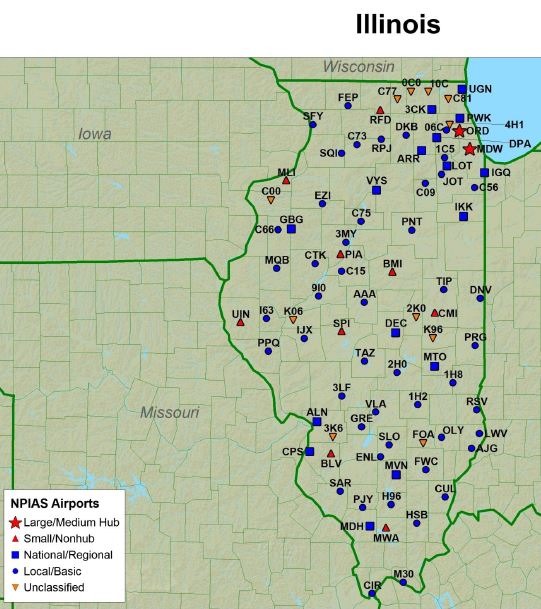 The FAA recently sent Congress its National Plan of Integrated Airport Systems (NPIAS) for Fiscal Years 2017 to 2021. Since 1984, the report has identified the airports that make up the national airport system, they role the play in it, and the types of airport development they are eligible for and the amount of Airport Improvement Program (AIP) funding to help pay for it over the next five years.

Chicago Executive Airport (PWK) is one of 3,340 public-use airports (3,332 existing and eight proposed) “that are important to national air transportation. This year the FAA estimated that these airports will need approximately $32.5 billion in AIP-eligible projects between 2017 and 2021. All commercial airports are included in the report, as are a smaller number of general aviation airports that make specific contributions to the NPIAS.

Digging deeper into the report, the FAA lists Chicago Exec as a National Reliever, and it is eligible for $83,851,701 in AIP funds. That’s not a guarantee, just the estimated maximum amount of AIP funding the airport is eligible to apply for. The report does not list specific projects. That involved process, which involves the airport, local and state authorities, as well as the FAA are the next steps.

As the report explained, airport improvements grow out of current and forecasted traffic at each airport, the use and age of their facilities, and changing technology that requires airports to upgrade or replace the equipment and infrastructure that supports them. The FAA works with state aviation agencies and local planning organizations to identify public-use airports for inclusion in the NPIAS.

The FAA said AIP projects are expected to decrease at large and medium-sized hub airports and increase at small hubs. “Development at all other airport categories remain flat.” Contributing to this is the conclusion of the FAA’s decade-long airport capacity effort and runway safety area (RSA) initiative. This included Chicago Exec’s EMAS, which recently demonstrated its contribution to safety and is pictured in the report.

In the NPIAS hierarchy, there are 395 primary airports (think O’Hare and Midway) that handle the majority of the nation’s commercial (airline) traffic. Logically, the remaining 2,937 NPIAS airports are nonprimary.

On this list, Chicago Exec’s listing assigns it a National role, meaning it “supports the national airport system by providing communities access to national and international markets in multiple states and throughout the United States. National airports have very high levels of aviation activity with many jets and multiengine propeller aircraft.”

And it is categorized as one of the nation’s 259 Reliever airports, defined as “An airport designated by the Secretary of Transportation to relieve congestion at a commercial service airport and to provide more general aviation access to the community.” And doesn’t that succinctly summarize Chicago Exec’s contribution to the communities that surround it as well at the nation in which it plays a significant role?