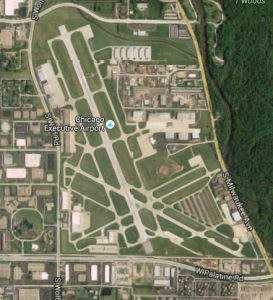 Chicago Executive Airport’s main runway, 16/34, is 150 feet wide and 5,001 feet long. Constrained by Hintz Road to the north and West Palatine Road to the south, it will not grow any longer. But it will soon be safer, when the installation of the engineered material arresting system (EMAS) is completed at the departure end of Runway 34. If you’ve driven Hintz Road lately, you’ve seen the work on the other side of the airport fence.

Runway 16/34 safely serves the aircraft that call Chicago Exec home, but when the weather is bad, or there’s a rare problem with an airplane, safety is enhanced by an overrun area at each end of the runway. The FAA calls them a runway safety area, and it recommends 1,000 feet. In cases where that isn’t possible because the necessary real estate isn’t available, the FAA offers federal Airport Improvement Program grants to fund the installation of EMAS, which quickly and safely stops an airplane in much shorter distances with little or no damage to the airframe.

To date, EMAS is installed at more than 100 runways at 60 airports worldwide. Chicago Exec is one of the rare general aviation airports that not only have EMAS—the system is generally found at airports that serve commercial operations—it will have EMAS at both ends of its main runway. The airport completed the EMAS at the departure end of Runway 16 around this time last year, said Jamie Abbott, airport director. And before this year ends, the bookend system will be complete on the departure end of Runway 34.

As of this week, the contractor has finished the 170-foot wide, 231-foot long foundation that will connect the EMAS blocks to the runway’s threshold. The EMAS at the other end of the runway is of equal width, but it is 243 feet long. In the coming weeks, workers will begin placing the EMAS blocks. From Hintz Road they may look like large, heavy concrete cubes, but the arresting secret of their contribution to safety is hidden within.

The blocks that are the heart of EMAS are customized for each airport and the aircraft that operate from it by the Engineered Arresting Systems Corporation (ESCO). They are formed using a homogenous mixture of cellular cement that crushes in a reliable and predictable manner under an airplane’s weight. For whatever reason, when an airplane runs off the end of the runway, EMAS slows its progress as if it was someone sprinting across a beachside parking lot into loose sand. And like the sprinter, FAA testing and a number of EMAS saves with aircraft up to a Boeing 747 have resulted in little or no damage to the aircraft.

It takes four weeks to make a batch of blocks. ESCO starts with 5 cubic yards of the cellular cement mixture that weighs approximately 25 pounds per cubic foot. The blocks have a standard length and width, but their weight, strength, and rate of height increase from the runway edge to its maximum height varies on the needs of each installation. The larger blocks can weigh several hundred pounds.

Each block is coated to protect it from weather, water, and jet blast. After the site is prepared for drainage and longitudinal slope, a concrete beam is built at the front of the arrestor bed. This beam is both a lead-in ramp and blast deflector. The arrestor bed spans the full width of the runway, and there are shorter blocks to either side that create steps for aircraft rescue and fire fighting personal and deplaning aircraft passengers and crew. The entire installation is computer modeled to meet the FAA-approved specifications for each airport installation.

Once the bed is prepared, it is marked with a grid that shows the precise location of each block, which is held in place by a mixture of hot asphalt and cement. All joints between the blocks are sealed with extruded silicone. According to ESCO, a typical EMAS takes two to four weeks to install, and that includes training the staff to maintain the finished system. Typically, that involves regular inspections and maintaining the protective seam seals. The top cover requires no repainting.

Given the weight of the engineered material of which they are made, building the EMAS out of blocks not only makes for more efficient and economical installation, it allows the replacement of blocks that have done their job of safely stopping an aircraft.