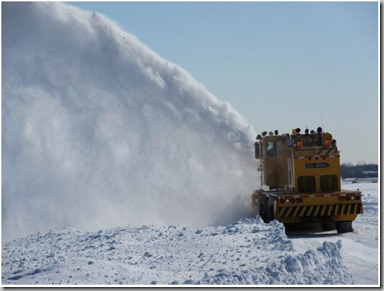 The FAA’s new runway Takeoff and Landing Performance Assessment (TALPA) was the major change discussed at the recent Snow and Ice Committee meeting the tenants and users of Chicago Executive Airport, said Andrew Wolanik, PWK’s operations coordinator. Not only does it change how the airport operations crew determines the runway conditions, it changes how those conditions are reported to the airport’s users.

The federal NOTAM (Notices to Airmen) system will now be the primary method of disseminating runway conditions to all users at every airport including air traffic control. To test the system’s latency, the time it takes the surface condition NOTAM to reach the control tower from the the operations keyboard, Wolanik conducted several tests. The results were the same: the tower’s fax machine spit out the test NOTAM 90 seconds after he punched the submit key. Per a freshly revised Letter of Agreement between the air traffic control tower and airport management, airport operations must either radio or call the surface condition NOTAM directly to the control tower as well.

How runway conditions are assessed and communicated aren’t the only changes in the airport’s snow and ice control plan. In revising the plan for the 2016-17 season, the staff used Part 139 requirements as a guide, said Wolanik. “We are not an airport that serves commercial airlines, but we strive to meet and exceed the level of safety, and working to Part 139 snow and ice control requirements further improves Chicago Exec’s general operating standards and safety.”

Those standards include staff review of all applicable standards right down to the height of snow banks. If they are too high, not only can they damage aircraft they can block signs, lights, and markings and impede the accuracy of essential navigational aids. Training is another requirement, and the entire operations crew is cross-trained on every piece equipment. And that fleet of plows, brooms, and blowers will grow by one with the arrival a new Oshkosh H-series rotary broom, which will be designated Airport 20, in February 2017. 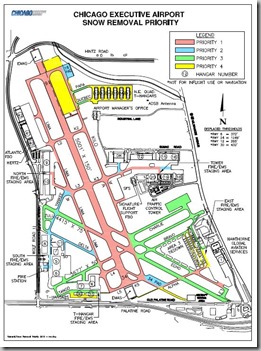 When snow falls on an airport, it is not a storm. It is an event, and the staff evaluates its efforts after each one, noting the specifics of the precipitation and environment and what removal tactics worked and what could be improved the next time the crew faces similar conditions. At the end of the snow and ice season there is a cumulative review, and that data helps the airport update its snow removal priority map, said Wolanik. Priority 1 (the red on the adjacent map) is the primary runway, the taxiways that connect it to the entrances of all three FBOs, the main ARFF (aircraft rescue and fire fighting) routes, and the five in-pave fire hydrants that cover the airport operating area.

Throughout the season, the airport staff is attuned to the weather 24/7. And quoting the airport’s Snow and Ice Control Plan, removal efforts “commence as soon as possible when the presence of frost, slush, wet snow, dry snow, or ice is observed on the pavement to a maximum of a depth of 1/8” (3 mm) in accordance with Advisory Circular 150/5200-30D. Snow and/or Ice removal operations will resume until the wintery precipitation event has completely ceased and the airfield pavement surfaces are cleared.”

Part of those efforts includes hourly assessments of the runway conditions. Like every other aspect of the plan, this assessment follows a predetermined route that inspects the length and width of the runway and associated taxiways. Part of Chicago Exec’s assessments will include use of the Bowmonk AFM2 Friction Tester, which is calibrated annually. The Mu readings are no longer allowed to be provided to ATC and its users, he said, “but it will give our staff trending information that we can use to adjust the TALPA codes to provide the best runway condition information and snow and ice removal attack methods during the middle of a snow and ice event.”